Down to the Marrow 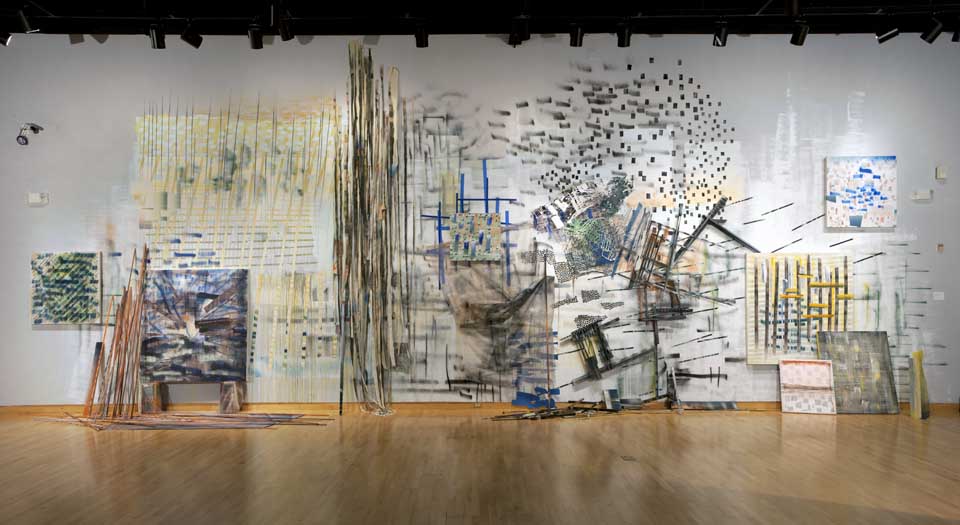 Within this installation, the parameters that delineate the body of a painting became blurred. When these boundaries were distorted, things shifted from the realm of control into the realm of the unkempt. In Down to the Marrow, the edge of the canvas was renegotiated when the act of painting traveled onto the walls, behind draped translucent fabrics, and onto the floor with a pile of scrap lumber and cinder blocks. Paintings deteriorated, either ripped into fragments or rapidly unweaving, their inner wooden structures crumbling. As the physical body of painting began to unhinge, the space it encompassed became more significant. In this instance it was the wall that became the most important part of the work. Paint splattered on the wall from where it ran off the surface of the paper or canvas. Tape and collage elements tacked themselves to the wall’s surface as sorry, unusable remnants. Salvaged lumber, fabrics, cinder blocks, packing foam, and so on were piled and propped in front of it. As I continued my work I found that, quite often, the painting I was working on would finish itself before the process itself was resolved, and I turned to the walls when this moment arrived.