The Hound on the Moor 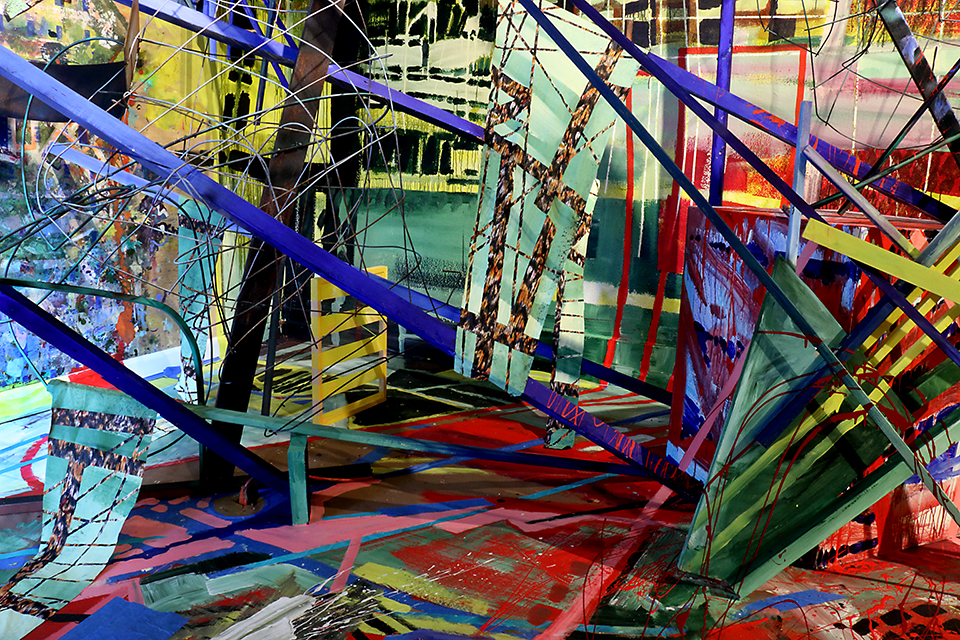 Hound on the Moor positions the artist’s studio as a visually and psychologically charged location. Looking towards The Red Studio, the famous 1911 painting by Henri Matisse, Hound on the Moor depicts an environment in flux between finished work of art and an artifact of the process of creation. The exhibition space has been utilized as an on-site studio, allowing the gallery to become inherently charged with a type of painterly energy not usually seen or experienced in a museum setting. Additionally, architectural elements from my studio are relocated into the exhibition space, repurposed as art objects in their own right. For instance, large segments of his studio floor containing the residue from years of painting are now exhibited as a large painting on the wall. Elevated into art, these studio-process artifacts intermingle with other forms of residue and detritus and challenge the notion of what constitutes a fine art product. With a charged atmosphere of being simultaneously assembled and demolished, Hound on the Moor re-evaluates the parameters that define and separate painting from environment.

Literary references play a significant role in my working methodology. In this installation, Sir Aurthur Conan Doyle’s The Hounds of Baskerville came as a source of inspiration, where the harsh landscape of the moor is personified and amplified through the imagery of monstrous hunting hounds. In Hound on the Moor, the installation becomes a type of beautiful yet uninhabitable landscape developed around the idea of hounds hunting an injured bird as it attempts to flutter and scatter through the brush.

As part of the experiential quality of the installation, a sound piece called Broken Flight was created through a collaboration with Unified Sounds. Audible through headphones, the viewer’s experience unfolds non-linearly as sounds echo and jump through the space, at once behind and in front and off to the side. Synthesizer beats, orchestral music, the human voice, and bird calls all overlap in the complicated audio, creating a dark, tense cadence through which the viewer can experience the visual complexities of the installation. The result is an eerie, unsettling, yet striking sense of creation and destruction in time and space.