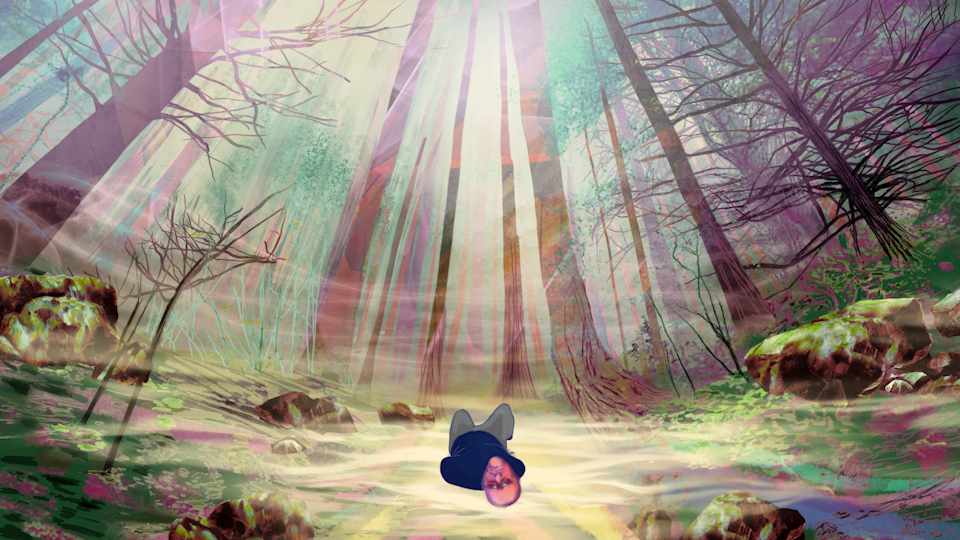 Disappearing Pathways is an award-winning animated film by Michael Covello and Elizabeth Schneider.

Our explores ideas about interconnectivity through multi-dimensional narratives. This type of layered storytelling is universal, but also extremely personal, pulling from both autobiographical and found source material. Our narratives are highly influenced by natural settings and what humans do in them. How does a person interact with place or space? What do they want from it and how do they change or alter it? How does place or space influence what they remember about their life? In Disappearing Pathways, the narrative follows a man suffering from auditory hallucinations tied to the natural world – the plants themselves have become personified. Throughout the animation, we depict “nature” in a variety of ways, from the engulfing, majestic beauty of an enchanted forest to the humble, resilient, and ubiquitous weed. Culturally, nature can be both coveted or undesirable simply by virtue of perspective. When dealing with this categorization, our first question was: when does a plant become a weed? And then we began to think about how the symbol of the weed could be used to examine our own role in society. When does a “human” become a weed? Is this tied to how we navigate and understand community and communication? In relation to mental health, when does a thought become a weed in one’s mind?

Disappearing Pathways is our poetic exploration of these questions, and an examination of how perspectives can shift depending on where you are standing.

This animation has been screened at the following National and International venues in 2021: